Armed with a flaming sword, a lion shield (able to animate for short periods), Slippers of Spider Climbing, and a cloak that gives off a shroud of smoke.

An envoy sent from the Unseen Court, he was tasked with slaying Duchess Ethelyn to send an unmistakable message that her treason against Risur was not endorsed by the archfey of the Dreaming. He appeared to have some interest in Nathan Jierre after the tiefling mentioned that he’d met another member of Varal’s family: Kasvarina. He was a mighty warrior indeed, but by the time the constables caught up to him he’d been severely wounded, and he fell to their attacks—but not before claiming the life of Drew McTaggert.

Sometime after, it seems Asrabey was raised from the dead by his masters, and was then sent to collect Kelland’s Tribute in Flint: “one season slain for one war unfought.” He came in search of Ekossigan, one of the six Unseen Lords, who had gone rogue and wass suspected to be carrying out a deadly agenda against Risur’s center of industry.

Though genuine in his depiction of Ekossigan as a threat, the dreadnought had come to Flint for a much more personal reason. He used the constables to gain entry to the Bleak Flint facility where they found the colossus, and after disappearing into the VIP lounges and abandoning the constables mid-battle, he emerged some moments later with his missing wife Kasvarina Varal in tow, who screamed upon hearing the colossus call her “Mother.”

He ended up taking her all the way to Elfaivar, and gained her a safe haven in Sentosa. He still harbors a grudge against the party (mostly against Qiyet, who killed him), but likely acknowledges that they are in the best possible position to help his wife—not to mention stop the Obscurati from severing the world’s connection to the Dreaming itself.

The following was overheard in the keep at Axis Fortress:

Asrabey: “Save your pleading breath for prayer.”

Duchess: “If you have come for the reason I suspect, you should pray with me as well. You are a murderer, Asrabey. Did I so displease the Court that you needed to slaughter a hundred to reach me?”

Asrabey: “To forestall war, yes! Your people must not think we are the ally of a kingslayer. And worse,” he sneers at the tiefling, “one who consorts with devils.”

Nathan Jierre: “Um, perhaps reason is a bit much to expect at this time, but can we talk about this?”

(The eladrin flicks his sword, which extends out to a flaming whip and cracks the tiefling across his face, then snaps back to a longsword.)

Asrabey: “You are lucky your cursed flesh will not burn. But I have other ways to make you suffer.” To the duchess he says, “Prepare yourself, and you may die with dignity.”

Duchess: “Wait! My brother won’t execute his own blood, and so long as I live I can still oppose him. There are more important matters than—”

Asrabey: “You struck the first blow. Aodhan was a soldier, as I am, and forgiveness does not come easily to our kind. He’ll never listen to you, not in the short years he has left. Already you are vilified. You promised your land would pull away from these fiends, would return to the old ways, yet you have fallen in with them yourself.”

Duchess: “You don’t understand. Nathan is on our side. There’s a threat to Risur and the Unseen. I told the Court as much—”

Asrabey: “Enough. Ethelyn, please do not make me watch you beg.”

Duchess: She glares. “Asrabey Varal, your closed mind has doomed us all.” (She sits up straight despite her stomach wound.) “Very well. Finish it.”

(The eladrin stops before he has managed to raise his sword for a killing blow. He turns away from the duchess, grabs the tiefling by his vest, and leans close.)

Eladrin: “How do you know Kasvarina!?”

Tiefling: “Um, what—? She … she was here, months ago! She was on the arm of a Crisillyiri man. In the company of my cousin. They took a tour of the mines. They left a few days later. I … I think she was the one who crafted the portal ring.”

Duchess: “Asrabey, I’m trying to tell you, he’s an ally. He’s seen things, and we’re trying to find out what it all means. I think Danor means to destroy both our nations. My brother wouldn’t listen, even the Court ignored me, but you have to believe me.”

(The eladrin considers for a long moment. Then he heads for the double doors to check his escape route.) 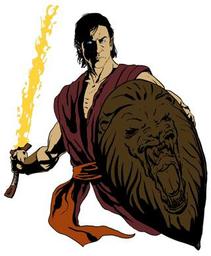