According to recent intel from Tinker Oddcog, Borne’s specifications called for it to be able to lift a flat object one hundred feet in diameter, weighing just over 14,000 tons, and hold it up with one side angled on the ground. It needed to be able to withstand truly extreme energy, equivalent to standing in a volcano, as well as resist kinetic injuries.

It needed to stabilize its own magical energies, without having to rely on power from other planes. Tinker notes that the last refit they made before Borne’s ‘episode’ was to open a small hollow in the colossus’s chest, about big enough to hold a pumpkin, which had a pipe that could feed in some sort of liquid fuel.

It also needed to be able to function underwater for extended periods, at pressures seen only deep under the ocean.

Tinker worked with experts in several fields to integrate the necessary components. He was particularly fascinated working with the Mindmaker because the man insisted the colossus be capable of nuanced facial expressions so that it could interact and express itself. Tinker even mimicked elements of the little-understood endocrine and vascular systems to grant the colossus physical feedback of its own emotions.

Of course, working on huge versions of microscopically tiny anatomy just made Tinker more enthralled with the small, and nervous about the massive. But he can rattle off three dozen locations on the colossus that a precise application of force or a specific variety of magic could debilitate it. For instance, while its exterior has magically reinforced adamantine plating, for budgetary reasons many joint components— analogous to ligaments—were made of traditional adamantine, which is vulnerable to rust magic. The witchoil furnace could be disrupted by a burst of positive energy, assuming a saboteur could get inside the colossus’s torso (which would likely incinerate the intruder after automatically dispelling any magical protection from heat). And the fuel feed piping to the housing in the chest is insufficiently secure, so it could probably be breached by a 36-pound cannonball.

Psychic damage affects the colossus normally, as even magically-reinforced armor can’t protect his free-willed mind (though one would have to target his head specfically, which would tower out of the range of most ground-based mages).

300 feet tall, built of adamantine, powered by a massive witchoil furnace… and bearing the mind of a simple child. Borne is the culmination of the Obscurati’s plans in Flint, but the constables’ appearance triggered a tantrum in the mighty construct, which ripped apart Cauldron Hill and unleashed him upon the world.

His body is all but invulnerable to cannonfire, but the power of the Coaltongue’s brand softens his body enough for conventional weapons to harm him… the only problem is that his body self-repairs itself at a frightening rate, and while it is possible to weaken or stun him, Risur seems powerless to permanently deactivate or destroy him. Only She Who Writhes keeps him at bay for now.

He refers to Grappa as “father,” and to Kasvarina Varal as “mother.” According to Grappa, there were three individuals who most contributed to Borne’s construction: The Steelshaper, the Mindmaker, and the Gearbuilder. Kasvarina’s involvement in the process is unknown, though she did contribute to his education. 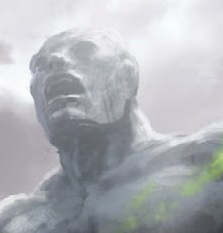