The Headless; "jester" of the Unseen Court.

A somewhat infamous fey who acts a mix of trickster and jester for the Unseen Court. Like actual members of the court, Copperhat has no face, at least none that anyone can see. His namesake hat sits atop an invisible head, which is enough to fool most minor fey into thinking he’s really one of the Unseen Lords.

Recently, he met with Talon, warning him that “an eladrin messenger of the Court” would soon come to Flint and invoke Kelland’s Tribute, but he’d have ulterior motives in doing so. Copperhat’s motivations for bringing this to Talon’s attention are unknown. 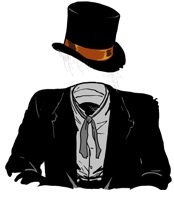