Ob turncoat, known as "The Mindmaker."

Grappa was found dead in the little-used basement of a steel mill in Parity Lake, in a room with a rusted iron circle set into the wall. He still had over 5 platinum in his pocket, so his death wasn’t a result of mugging, clearly. He also had ship schedules for a number of different vessels, all advertising passenger-carrying craft that would be setting sail for Elfaivar between the 5th and 15th of Summer 500 AOV, just after the events of Chapter 2.

His skull was caved in with what appeared to be a golem’s fist; the remains of the construct were found next to him. His wrists were bound with an iron ingot – somehow bent around him without breaking his bones. He appears to have been wearing an amulet of rusted iron, though it was torn off his neck, leaving only a few broken links.

In Hugo’s vision, he caught a glimpse of the man’s face – human, likely in his fifties or sixties. His attacker was forcing the contents of a vial of witchoil down his throat.

Alexander fought for Risur in the Third Yerasol War
four decades ago as a mere foot soldier. After losing
too many friends he devoted himself to learning magic
of golem-crafting, hoping his homeland could field an
army of automata instead of shedding real soldiers’ blood.
But his interest slowly drifted from golem construction
to the crafting of minds for these artificial warriors, as
well as enchantment magic and other ways to end a
conflict without anyone dying.
He helped train and educate the colossus, but once
he got an inkling of its actual purpose he rebelled. His
first attempt earned him a geas to keep him from
talking. His second attempt got him killed, though he
managed to transfer his mind to a golem body. His third attempt got that body killed,
and now is stuck in the body of his murderer, Leone Quital.
Grappa looks on life with casual aplomb, and is a bit of a bumbling professor,
full of clever ideas and bubbling with enthusiasm, but not properly grasping the
dangers involved.

Thanks to a mad-science endeavor on the part of Hugo, telepathic communication became possible between him and the golem’s “brain” found at the scene. It identified itself as Alexander Grappa, whose true body was the long-dead corpse of the old man. He says that some know him as the Mindmaker, due to his specialization in mental magic.

In explanation of what happened to him, he claims he fled from a “facility” hidden in the Bleak Gate, taking along with him the eladrin woman seen in Hugo’s Object Reading vision, as well as a golem servant. His “rival” caught up to him, however, and decided to kill him slowly. Acting out of desperation, Grappa used a spell to swap minds with the golem (installed with only a rudimentary AI), and then used its metal fist to crush his own skull, ending his suffering.

Realizing what had happened, the as-yet unnamed Crisillyiri man tore the golem apart, but failed to realize that he hadn’t quite killed Grappa, whose mind continued to inhabit the mostly-intact brain of the construct.

Grappa apologizes that he cannot be more specific with names and places, for he is under the effects of a geas (sometimes called a quest spell) that prevents him from divulging certain information about his previous dealings.

Hoping to bring his “rival” to justice and save the “woman,” he guided the party through the facility itself, and allowed them to circumnavigate many of the location’s defenders. Thanks to his rebuilt voice module, he was even able to talk down the pair of golem prototypes in the final hallway.

He was seen tackling his killer, the Steelshaper, to their ambiguous demise. After encountering Leone in Ber, it was discovered that Grappa had taken up residence in the mind of his two-time killer, and both are now back in RHC custody.

During his mission with the constables in Chapter 7, Grappa (now in the body of Leone) somehow got himself killed… for the third time now. It remains to be seen whether he transferred his mind again. 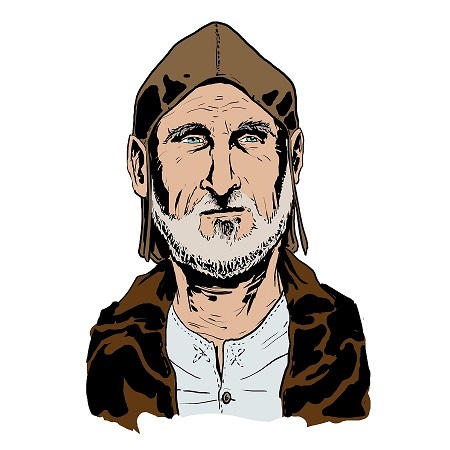