This obese woman boarded the train midway through the first day, in the Danoran city of Keskay. At almost all times, a pair of golden bracelets linked by a golden chain connects her to a shorter, thinner figure, clad in black veils so complete it’s impossible to tell if her associate is male or female.

This veiled figure never leaves Elanor’s sight, and only eats food that Elanor provides. What’s more, Elanor seems highly unnerved by the presence of Joliet DuBois (Kida ve Alema). Given this evidence, and the setting, the constables are currently operating under the assumption that she’s a slaver, and the veil hides an eladrin destined to be bought by some perverse noble. Since the practice isn’t illegal in Danor, just frowned upon in certain circles, she has been thus far uncontested by security.

Elanor wears several rings of varying shapes and styles. Any one of which might possibly contain the inscription that would mark her as a member of the Obscurati. 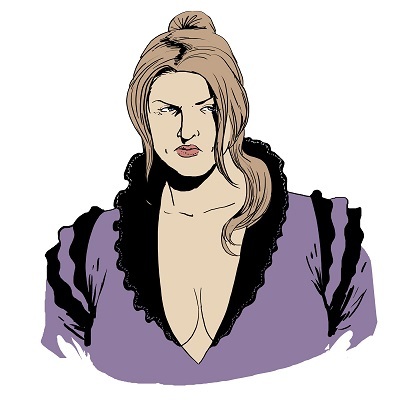