Leader of the terrorist Eschatologists.

Leader of the cult behind the recent terrorist attacks on Flint, it is believed by some that Komanov cannot be harmed by any living creature, as she exists partially at the end of time.

Her perceived temporal state aside, it is clear the dwarven woman does not approve of the efforts of Risur and Danor to put away their long-standing animosity and bring peace to their corner of the world. Her (radical) belief in Heid Eschatol’s teachings drive her and her followers to make things end, in the hopes of hastening the world’s end. 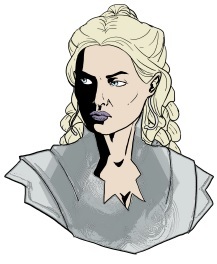