Minor Actions
Vengeful Gaze of the Goddess – Divine
You see as if your eyes were those of Srasama herself; no enemy can evade you for long.
Target One creature you can see.
Effect You unerringly know the direction (though not the distance) to the target until you take an extended rest.

Serena is a brilliant and driven young woman, but being one of the few eladrin in the entire city means that she’s constantly turning heads wherever she goes, and as such tends to be rather shy. Serena is probably her best friend, and the two get along like sisters, though the rumor mill in the office is that they both have their sights set on Carlao Langford.

Unlike Kida ve Alema, she prefers to keep her membership in the mystics a total secret, and is instead posing as a skyseer. This truth is revealed here, since the players might be controlling her as a secondary character in chapter 5; no one actually knows this about Kaea save for Kida herself. 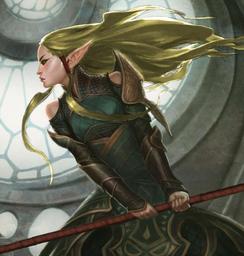