A dragonborn general in the Beran army, Kenna assumed the political position of Minister of Dragon Affairs with Shantus’ rise to the Brusedom. Her ministry was originally tasked with handling groups who still identified with the dragon tyrants, but over four decades it has morphed into a responsibility for the treasures of rediscovered dragon lairs, and today is mostly just the nation’s official bank. Still, all members of the ministry are given ceremonial training in historical dragon-slaying tactics.

At some point, Kenna was abducted by Pemberton and replaced with a duplicant. It was still controlled by her sleeping mind, but the technology involved allowed her captor’s to easily take control of her—they used her, along with many palace guards and other resources, to make a hasty attempt on the Bruse’s life, but the constables were there to foil it. They were later able to rescue Kenna herself. 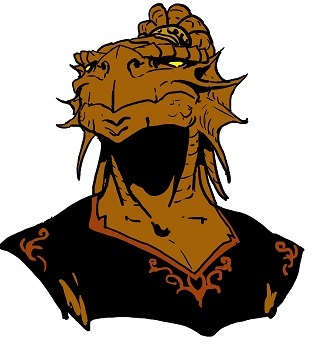