A half-deaf bodyguard working for the Ob.

Merton’s specialty lies in the manipulation of sound waves, a feat he accomplishes through the use of an arcanoscientific staff that resembles a large tuning fork. He can amplify noise into a form of destructive resonance that can harm foes, but it’s even more effective against solid obstacles like trees, stone, or metal. He’s also a talented trainer of beasts – Talon’s canine hearing allowed him to detect a high-pitched noise he broadcast to a pair of tyrannosaurs, signaling them to attack the party.

The nature of his loyalty to the Ob is unclear; he doesn’t talk much, owing to the near-deafness his aural experimentation has inflicted upon him over the years. He has no ring though, so it’s likely he’s simply mercenary muscle.

Hugo and Qiyet may vaguely recall seeing him and Rush when Lya Jierre showed up to officially reclaim Axis Island, way back when.

Merton was killed during the climactic battle at the end of Chapter 6, in Pemberton’s volcano lair. 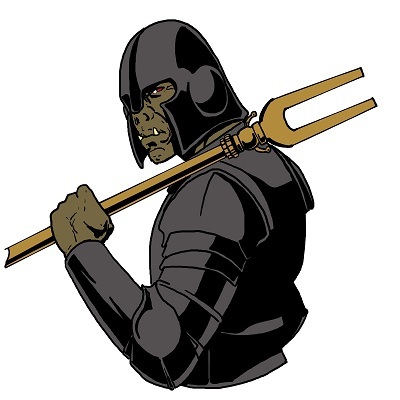