Ottavia is somewhat of a curiosity, being an elven woman of apparent importance in a predominantly human religious organization. Yet, there can be no mistaking the prominent geometric tattoos on her neck and arms, marking her as an oracle of the Clergy, which were said to hear the voices of angels.

Totally deaf, she relies on Luc Jierre to interpret her words to others. She can read lips (in Common at least), but no doubt benefits from occasional clarifications that he signs to her. This travelling arrangement is even more perplexing, as historically the tieflings of Danor have had very cold dealings with the Clergy.

Confirmed as an Obscurati member, she is now in RHC custody.

See Luc’s page—she is seldom seen far from him. 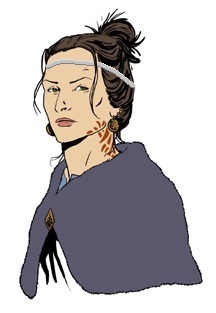