Former Mayor of the Nettles.

A long-time player in Flint politics, Macbannin’s fascination with the history of Cauldron Hill led him to pursue the mayorship of The Nettles. He studied all manner of defensive magic, as well as a fair share of proscribed dark arts, in order to earn the trust of the previous mayor. Macbannin has protected the city from the curses on Cauldron Hill for over a decade now.

Despite his age and somber responsibilities, Macbannin comes across as high-energy, with a rascally sense of humor. He’ll often first meet people with a stern, sour expression and brief statements of disapproval, before cracking a smile and saying he was just kidding.

Despite his outwardly sociable demeanor, it appears the mayor was a traitor to the crown! After his underground reservoir of witchoil was revealed, the man went on the offensive, trying to silence the constables with nothing more than his house staff to aid him. He was taken into RHC custody, muttering under his breath that he did it all for his country…

He was found dead of “suicide” in his cell several days later. His spirit was mysteriously absent, as reported by Gaethan Kirkland.

Templeton’s gut instincts were right: Macbannin is still working for the Obscurati. Despite being dead, Macbannin comes across as high-energy, with a rascally sense of humor. He advocated the Ob’s goal of changing the world as the spokesperson for the Arboretum faction…

Or so he would’ve had everyone believe. In truth, he had allied with Amielle Latimer in an attempt to slip out a few VIPs that could aid the RHC against the conspiracy—but the ship they commandeered vanished shortly after the Convocation in Chapter 7.

His current status as a ghost casts light on the mysterious circumstances of his death. Likely, he was possessed by Nicodemus. Unable to feel pain, the mastermind easily killed the body he was wearing, and then absconded with the former mayor’s soul. 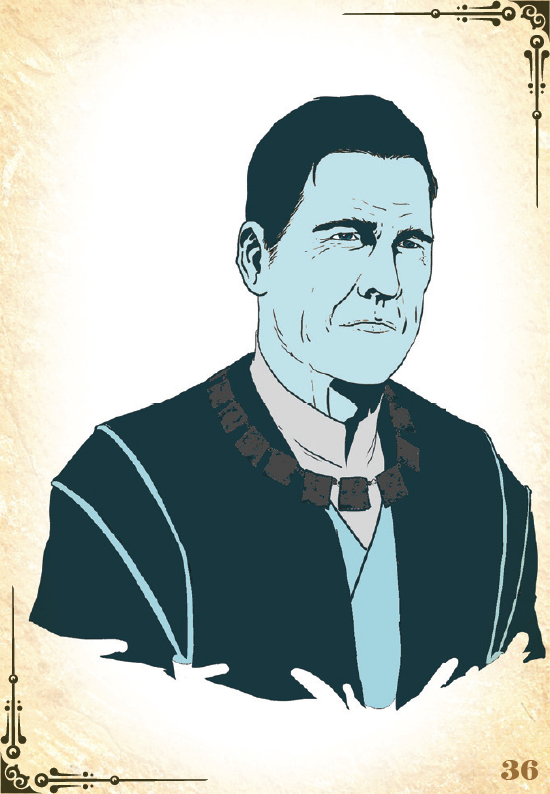