The sentient Gidim released at the Ziggurat.

Only seen by the constables for a few moments, Sijhen is a humanoid with dark blue skin, four fingers on each hand, and four beady black eyes arranged around a large forehead. Like any Gidim, it is composed of psionic energy, only manifesting when it feeds on corporeal beings, like it tried to do with Finona Duvall.

The extent of its power is unknown, though the Content Not Found: voice-of-rot-1 certainly deems it a threat to this world. Currently, it is hiding somewhere in Flint, and Xambria’s note suggests it is possessing her somehow.

In the finale of Chapter 3, the constables destroyed Sijhen during its attempt to open a planar portal. In the process, Xambria’s soul/psyche was left without an anchor, and reflexively attached itself to Hugo in order to survive. 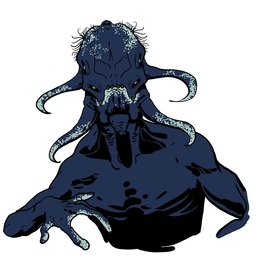