A high-ranking executore hardened by the Revolution, Soleda looks a little young to be Qiyet’s mother, thanks in part to the comparatively quick speed that orcs and half-orcs reach adulthood, as compared to humans.

Soleda’s temper is legendary. Though not quick to anger, she has a palpable aura of malice about her, and when she resolves to mete out punishment to someone, it is harsh and absolute. There’s a famous story that has circulated the RHC office for a good while concerning Qiyet’s education in Danor. According to the anecdote, a certain official barring Qiyet’s entry to the Jierre Sciens d’Arms wrote a rather derogatory letter to the Outrunner household in which he decreed that no savage orc would ever sully the academy’s presitgious halls. One week later, he disappeared under mysterious circumstances, and was never heard from again.

Currently, Soleda is traveling with the constables during their excursion. While not a directly Beran reflection of the RHC, the executores are the highest-ranking law enforcement officials in its borders, and so it only makes sense to have one of them be their liason. Qiyet has remained tight-lipped about their reason for seeing the Bruse, and with everything that has happened, she can’t be sure that her mother isn’t working for the Ob, either willfully or under false pretenses.

Soleda has noticed this suspicion, though her emotional reaction to the lack of trust is buried beneath her hardened mask of devotion to her work. Mother and daughter are more alike than they’d admit, it seems. 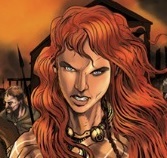