The professor who found the Apet Ziggurat.

Xambria was a rising star in the academic world of archaeology, and at 28 she’s the youngest professor at Mitchell University in Slate. She has always had a particular interest in Ancient relics, since the golden treasures were so wondrous to behold.

Xambria preferred a hands-on approach to unearthing the secrets of history, and frequently put her life in danger, either on digs in hostile lands, or because the excavations themselves were filled with traps. She enjoyed nothing more than exploring ancient ruins, using a canny mix of caution and daring to avoid curses and traps, or to somehow survive the ones she didn’t see in advance.

In Summer, she took a team out to explore a ruin built by the Ancients, now known to the constables as the ziggurat of Apet. Her team perished in an unknown incident, of which she seems to be the sole survivor. She is currently suffering from amnesia surrounding the event.

Her doomed expedition was founded by Caius Bergeron.

More recently, Xambria found the ziggurat of Mavisha after confronting her former patron, but was not able to dissuade Caius’ specialists from leaving the seal alone without the help of the constables. After leaving the site, she teleported away via ritual, timing her escape suspiciously concurrent with the appearance of the humanoid Gidim, Sijhen.

Xambria was under the control of Sijhen all along, the Gidim using her in a complicated ploy to open a door back to its homeworld. Her body corrupted by alien energies, and her mind ripped free of her brain, there is no simple way to raise her from the dead – but she has survived inside the psyche of Hugo Von Gearkinson. For now, she seems harmless, though less than pleased about her situation.

For now, removing Xambria would only result in destroying her consciousness. Perhaps time will reveal another way to help her.

Midway through Chapter 7, the constables were able to help Alexander Grappa find a lich who possessed soul-manipulation magic. With his help, Xambria’s consciousness was moved into the body of a low-level Ob researcher; she has vowed to pay back Hugo’s help by acting as a spy inside the conspiracy, much like Grappa. 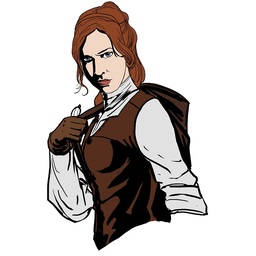