You pull the pin, throw, and a swarm of badgers appears!

Critical: +1d6 per plus (plus the normal hi-crit for a grenade).

Power (Daily) Standard action. Summoning, Inaccurate
Attack: Area burst 1 within 5/10, all targets in area. +21 vs AC.
Hit: d10 damage, or half on a miss.
Effect: A Dreaming Badger Swarm appears in the burst (right after the explosion, thank you), overlapping the spaces of other creatures; any creatures hit by the attack are automatically grabbed by the badgers. The swarm behaves normally for a summoned creature: If it is destroyed, you lose a healing surge, and it does not take its own actions.
Special: If you throw a second badger grenade before taking an extended rest, no badgers will appear. The fey creatures will only answer your call so often.
>Level 23: +26vs AC; 2d10 damage.
>Level 28: +31 vs AC; 3d10 damage. 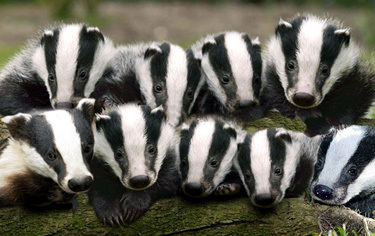