You pull the trigger, and a badger springs forth to attack your foes.

Critical: +1d6 per plus (plus the normal hi-crit for a firearm).

Power (Daily) Free action. Summoning
Trigger: You hit a target with a ranged attack using this gun.
Effect: A Dreaming badger appears in an unoccupied square adjacent to the target, and the target is grabbed by the badger. The badger has your defenses, and hit points equal to half your bloodied value. If it is destroyed, you lose a healing surge. The badger does not take its own actions.

The product of two gnomish inventors of questionable sanity, this weapon made its debut at the Kaybeau fair in Flint during Autumn of 500 AOV. The copies of the guns that were originally confiscated by the RHC have now been returned to their rightful owners, though constables may still special-order one from Fildi and Dilfi themselves. 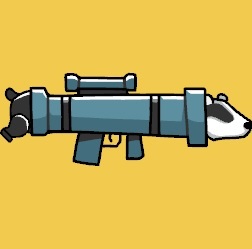