The technicians assure you they’ve got all the kinks worked out, and that the thrum of the steam engine strapped to your back is meant to be reassuring.

Note: this item is designed to be worn over your normal armor. You do not need to be proficient in heavy armor in order to use it. It does act like heavy armor, though – while wearing it, you do not gain benefits that require you to wear light or cloth armor, such as the bonus from the Unarmored Agility feat.

Property The suit is priced as a magic item, but is not enchanted. It functions normally in dead magic zones like Danor.

Property You can climb into or out of this suit by spending two move actions (one to get in, one to close it up). Once it is closed, you can use the suit’s encounter power to activate it. While the suit is deactivated, it is too heavy for you to move, causing you to be treated as helpless. Items on your person cannot be retrieved while you are in a closed-up suit.

Property While in the suit, you replace the value of your (armor bonus + ability modifier) with 11. You still gain the enhancement bonus to AC from magic armor you wear underneath the suit, but properties and powers of your conventional armor (magical or otherwise) do not necessarily apply (DM’s call). For example, the daily power of a robe of quills would not work inside a Steam Suit, as the quills would not have line of effect to your enemy. The encounter power of stoneskin armor would work normally, as would the property of armor of resistance—though the damage resistance it affords would not protect your Steam Suit from possibly sustaining damage.

Power (Encounter) Standard Action.
The suit activates. It can pick up and wield weapons and implements as easily as you. You can walk and run, but you cannot squeeze or swim (Unlike the experimental version, you can still climb, jump, and crawl). You replace the armor check penalty of your standard armor with -3.

You gain a +2 item bonus to damage rolls with melee attacks. Your carrying capacity is quadrupled – the suit propels itself, so its own weight (as well as the weight of the user inside) does not count against its carrying load.

Whenever an attack hits you (attacks that deal psychic damage or no damage don’t count), make a saving throw. If you fail 3 saving throws in this way, the steam suit breaks down and deactivates, and it must be repaired before it can be activated again.

Failed saves can be repaired with a set of artisan’s tools. 1 or 2 failures can be repaired swiftly, taking 30 minutes each (15 if the individual doing the repairs is a Technologist). A suit that has failed 3 saves requires an overhaul, and must be repaired over the course of an extended rest.

If you buy a higher-level version of this suit, the armor and damage bonuses improve as follows: 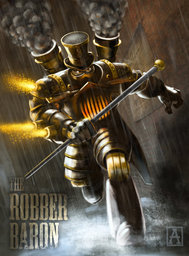