Who wants to be the first to strap a steam engine onto your back and wade into battle in a two ton suit of burnished steel?

Note this item is designed to be worn over your normal armor. You do not need to be proficient in heavy armor in order to use it. It does act like heavy armor, though – while wearing it, you do not gain benefits that require you to wear light or cloth armor, such as the bonus from the Unarmored Agility feat.

Property You can climb into or out of this suit by spending two move actions (one to get in, one to close it up). Once it is closed, you can use the suit’s daily power to activate it. Until you activate it, the suit is too heavy to move; you count as helpless, except against attacks that target your Will defense.

Property While the suit is closed, you replace the value of your (armor bonus + ability modifier) with 10. This means you still gain the enhancement bonus to AC from magic armor you wear underneath the suit.

Property The suit is as expensive as a magic item, but is actually not enchanted. It functions normally in dead magic zones like Danor.

Power (Daily) Standard Action.
The suit activates. It can pick up and wield weapons and implements as easily as you. You can walk and run, but you cannot crawl, squeeze, climb, jump, or swim. Your armor check penalty to Stealth increases to -5, regardless of what it was before.

You gain a +2 item bonus to damage rolls with melee attacks. Your carrying capacity is quadrupled – the suit propels itself, so its own weight (as well as the weight of the user inside) does not count against its carrying load.

Whenever an attack hits you (attacks that target your Will don’t count), make a saving throw. If you fail 3 saving throws in this way, the steam suit breaks down and deactivates, and it must be repaired before it can be activated again. Repairs can be completed during an extended rest.

If used outside of combat, the suit runs for a maximum of two hours before needing to undergo refueling and repairs.

This clunky prototype was designed by Alloquicious, a halfling inventor from southern Risur, and was on display at the Kaybeau Fair in Autumn. It had been confiscated by the RHC for a time, but has now been returned to its creator.

Getting hold of a copy of this prototype may be quite difficult (hence its classification as a Rare item), but someday the prototype might become a finished product, and be more readily available for purchase. 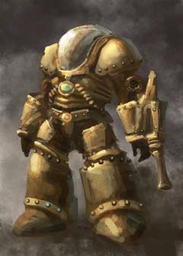