Styled with the colors of your homeland's flag, this weapon is imbued with the will of your country's ruler and the values of its people.

Level 3+ Uncommon
Weapon or Implement: Any

Critical: +1d6 per plus, or +1d10 per plus against your countrymen’s sworn foes (see below).

Property A Patriot’s weapon only fully functions in the hands of a wielder who is a citizen of the corresponding country. To any other bearer, it is only a magic weapon of equal enhancement.

Property To use the weapon’s daily power, you must shout a rallying cry in your country’s native language (suggestions are given below). The benefits of the power only apply to allies who can understand the rallying cry—in other words, speakers of that language, or non-speakers for whom you have taken the time to explain the meaning of the phrase you will use.

Note The GM may rule some combinations of Country and Weapon/Implement impossible. For example, it is impossible to enchant a firearm to be an Elfaivaran Patriot’s weapon, nor will you ever find a Danoran Patriot’s Holy Symbol.

Sworn Foes Non-native fey (those who live in the Dreaming, not Lanjyr), and trusted servants of the Unseen Court.
Property – “We will have peace in our lifetimes.”
If you do not attack during your turn (including readied actions), you gain a +2 bonus to defenses until the end of your next turn, or until you attack.

“Might!” (Daily) Minor action.
Effect: Allies that hear and understand you (in Primordial) gain a +2 bonus to damage rolls until the end of your next turn.
Level 13: +4 damage.
Level 23: +6 damage.

Sworn Foes Dragons, and creatures who can inflict the Dominated condition on others.
Property – “Civilized people fight one-on-one.”
Enemies do not gain the normal +2 bonus to attack rolls from flanking you. Note: You still technically grant combat advantage, for the purposes of effects like Sneak Attack.

“¡Liberdad!” (Daily) Move action.
Effect: All allies that can hear and understand you (in Draconic) may choose to either make a save against a dominating effect that a save can end, or make an escape check.

Sworn Foes Constructs, and those who keep eladrin women as slaves.
Property “Live well, heal, and return to the world renewed.”
If for any reason you spend a healing surge while at negative hit points, you may instead spend two surges. You may also stand up as a free action.

“Fukushū!” (Daily) Immediate Reaction.
Trigger: An ally you can see is struck by a critical hit.
Effect: If the struck ally can hear and understand you (in Elvish), they may make a basic attack against the triggering enemy. If it hits, it counts as a critical hit. 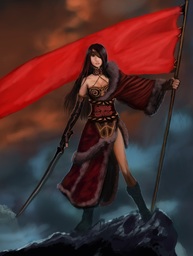