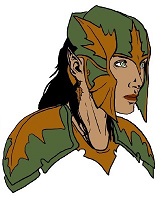 The Green Knight is the title held by the chief bodyguard of the monarch of Risur. While Harkover Lee often fulfills this duty, it is not his true position—he’s the Principal Minister, while the Green Knight is responsible for the Monarch’s safety first and foremost, with a secondary duty of acting as an envoy to the Dreaming when the King or Queen is unavailable to appear to them in person.

The position itself has existed for as long as Risur was founded, and the title bestows fey power on the chosen guardian. In practice, their abilities are similar to a paladin’s, but their abilities originate with a mixture of primal and arcane sources, rather than divine. Most notable, however, is their apparent inability to die. Most believe this to be the result of a cleverly-worded phrase in the pact Kelland made with feykind many centuries ago… though the text of the original truce is highly classified.

The current Green Knight is Dame Jillian (not pictured above).