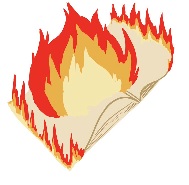 The proposal’s name refers to the philosopher monk William Miller who, five centuries ago, wrote treatises on potential societies, discussing their positive and negative traits. His works were generally critical of the religious establishment, and shortly after he tried to found a nation of his own, the Clergy burned him as a heretic atop a pyre of his own books.

The Pyre was first proposed by Kasvarina Varal. Due to her absence at the Convocation however, Cula Ravjahani is the Pyre’s representative, and she exhorts her fellow Ob members to put their trust in the wisdom of Kasvarina, one of the founding members of the Obscurati.

In the view of the Pyre, most suffering is due to misunderstandings between people with very different backgrounds. So, their plans are aimed at improving the world with invisible changes that will make people more aware of the thoughts and emotions of those around them. They would make people particularly keen at detecting hypocrisy.

The Pyre suggests replacing the current plane of Space with one that has an Empathy aspect. This would give people the psionic ability to detect emotions, but tests show that the effect is not obvious. Test subjects simply found themselves coming to agreements more easily, or at least they became more amenable to discuss problems ,rather than view a stranger as an enemy. Cula claims this new world order can be implemented with no disruption to people’s daily lives. There would be no chaotic upheaval, as with some other proposals.

Additionally, with a bit of clever orbit-tracing, the Pyre would remove the current planes of Air and Fire and replace them with a binary world: an air plane possessing a Speech trait, and a fire plane possessing an Expression trait. This would cause those who speak to have their true emotions more easily sensed, and likewise cause words themselves to carry more weight, making it easier for a strong argument to sway a person’s opinion.

Finally, the Pyre wishes to replace Urim with a plane of earth possessing the Logic trait, which the Pyre hopes will lead people to appeal to reason in their arguments. Otherwise, the strengthened emotional connection might have negative consequences.

Drawbacks include stronger storms, and weather that can respond to local moods. As with Colossus’s plan, the world will again become vulnerable to extraplanar visitors, but the Pyre takes an optimistic view of what civilization will be capable of if it is attacked. Perhaps visitors to the world will be simply be swayed by arguments, and become allies. In addition, replacing Jiese might make steam power unreliable or perhaps even impossible.

Interestingly, the binary pairing opens up a slot for a potential extra plane. It would need to be fairly weak—perhaps a moon rather than a full planet—but it would be possible to add some extra trait to the world. The Pyre is open to making agreements with other factions.

The Ob are fairly split on this proposal, some seeing it as too idealistic.